As I am sitting here trying to compose further blog articles that will inform and entertain everyone, my DH is making all sorts of obnoxiuos comments! I asked him for a suggestion for the title of this blog and as he knew I was going to add the picture with the twin carrier he suggested

"What a lovely pair of knockers!"
Anyway I will not be using that as a title but will continue on blogging. So as his comment leads to our latest purchase I will tell you about it. We found this site called Twins UK and it has some great articles for twins and mutiple births. The twin carrier was something that really caught my eye as I was thinking how are we going to get around while we are doing baby pick-up in May and June. Prams are definitely out in Delhi and even though we have the soft carriers it will be difficult to manange all 3 if we are down to 2 adults as we might be some of the time. So this article seems perfect and we ordered online and had a friend bring it across from the UK(thanks Raj ) . Here is Justin modelling for it and is where he came up with his title.


We also recieved further scans on our little one (the singleton) and the 3D images of this bubble. This little bubble seems to want to be special so is dragging his/her feet and the due date is 10 days behind the twins…. am so seriously hoping this will narrow down to under a week so that we can minimise the time we spend in Delhi….. monsoon season will be a test! But the 3D images are sooooo cute! Already a prima donna! 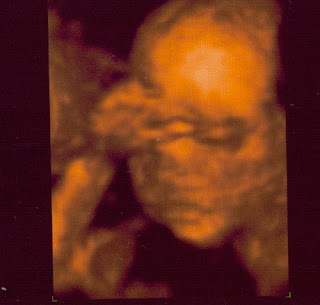 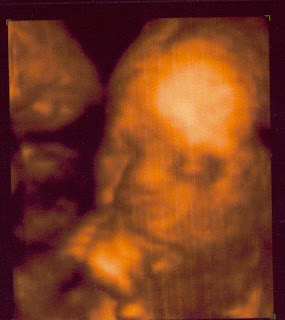 Next set of scans are due on the twins about the 20th of this month but will not be 3D (I don't think ) but will still post and update as we go along. The nursery is slowly coming along…. will need to find a bigger place but can manage with what we have now until after the babies are home with us…. but if that ideal place happens along in March/ April we will move then and will really be able to set up the nursery as we want to.
Posted by Anonymous at 10:58 No comments:

Today we received early scans on our little twin bubbles as there was a slight scare with a small bleed…. everything is fine and the babies are okay but they did send us some lovely new scan shots….. Justin feels that this one might be a boy as it is lying back chilling(or is that something we can see???)! 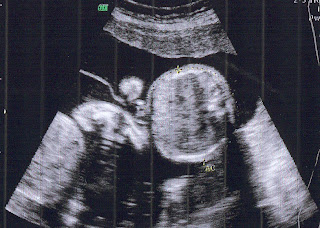 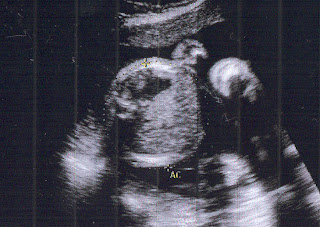 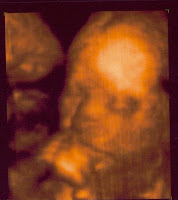 This little one is waving to say hi (or maybe trying to push the scanner away) so I believe might be a very social little girl….lol.
The scans say that they are weighing about 500grams each now and are 22 weeks and 2 days…. gulp time is slipping away on us. That puts them 2 days bigger than the last results but these things are very hard to determine at this time …. so due dates will remain the same (approximately anyway).

Yes I know we are early to do this but I figured that it is better to be organised and this also makes it seem like we are actually going to be picking up our 3 bubbles. The tickets are booked for 37 weeks and can be changed with no penalty and I have allowed for 5 weeks.... hopefully we will be changing that to 3 weeks:) 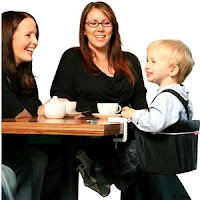 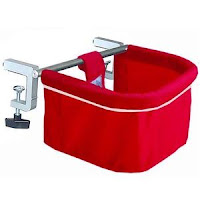 We have been slowly getting stuff organised for the arrivals of our triblings (3 siblings ... not quite triplets!)and have accumulated a large amount of stuff! Yesterday we headed to a flea market that did only baby and children's stuff and got some great bargains... a portacot for $10 (aus) that is like new and the best was 2 phil and ted metoo travel high chairs.... they are brilliant as we were concerned that having 3 normal highchairs would be a real pain as they take up so much room. These ones attach to any table and can be taken out with you anywhere.... not that we anticipate going out much...lol. But IF we did we have noticed a lack of high chairs in most places usually only 2 , maybe 3 and if used all of them we would not be popular. Actually probable won't be popular if we did take our 3 out to dinner.... poor other diners! Have attached the picciesso you can see how cool they are.

When we found out we were expecting 3 we spent heaps of time researching for prams and finally decided on the ABC buggy which can take 2-4 babies from birth to age 3.....it is a real humdinger of a beast! We have named it The Hummer 3 and heaven help anyone who steps in front as I am sure that the stopping distance will be at least 1.5 metres! The added hazard is as I am 5 foot nothing I can only just see over the top so people will be in double jeopardy..... well they have been warned.No it really isn't going to be that deadly for the general population but it will draw attention to us.... not sure how I feel about that but will deal with it as it occurs.Isn't she a beauty? 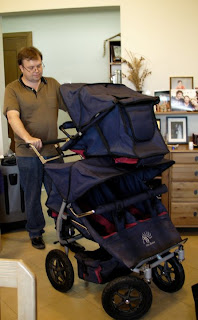 Will keep adding different things.... maybe even explain a bit about how we come to be on this glorious adventure in another entry. At the moment I am just enjoying this fantastic buildup to achieving our dream of having children together.
Posted by Anonymous at 13:49 4 comments: